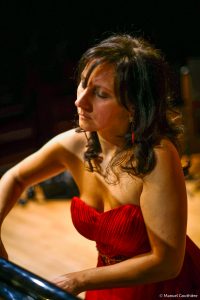 « Her pianism is a perfect blend of the lushness of Alexis Weissenberg and the laser-like precision of Glenn Gould » (N. Carusi, Libero); « Luxurious sound, harpsichord-like technique, clear formal structure: if she stays on this path, Maria Perrotta may very well become the Italian Rosalyn Tureck » (E. Girardi, Corriere della Sera); « She is shy and asks an incredibly low fee, which she is always ready to waive to donate her art. She is one of the world’s true stars of the piano. In the Goldberg Variations she is at the same level as Glenn Gould and Rosalyn Tureck » (P. Isotta, Corriere della Sera).

Hailed as a particularly communicative interpreter, Maria Perrotta came to the limelight in important international competitions such as the “Shura Cherkassky Prize” in Milan (2008) and the “J. S. Bach” Competition of Saarbrücken (2004), gaining critical acclaim: “Maria Perrotta can exploit the resources of the modern piano without running into stylistic inaccuracies. The crystal-clear sound, the always audible structure and stimulating phrasal articulation made this an ideal interpretation. » (Allgemeine Zeitung).

Maria Perrotta has broadcast on Sky TV and on German and Italian Radio. Her live recording of Bach’s Goldberg Variations was acclaimed by critics in major musical magazines: 5 Stars in Amadeus and Musica magazines, 5 Stars and CD of the Month in Suonare News and the Critics’ Prize in Musica & Dischi magazine.

In October 2013 Decca published a CD of her live recording of Beethoven’s last  three Piano Sonatas, which was given 5 Stars and chosen as the « CD of the Month » in Amadeus Magazine. The CD was also acclaimed in the British musical magazine Gramophone in October 2014 .

Maria Perrotta studied at the Conservatoire of Cosenza, her native city, and she graduated with distinction from the Milan Conservatoire under Edda Ponti. She subsequently graduated in chamber music from the École Normale de Musique in Paris. She also studied in Imola with Franco Scala and Boris Petrushansky and in Germany with Walter Blankenheim. In 2007 she graduated with distinction from the Academy of St Cecilia in Rome in the class of Sergio Perticaroli.